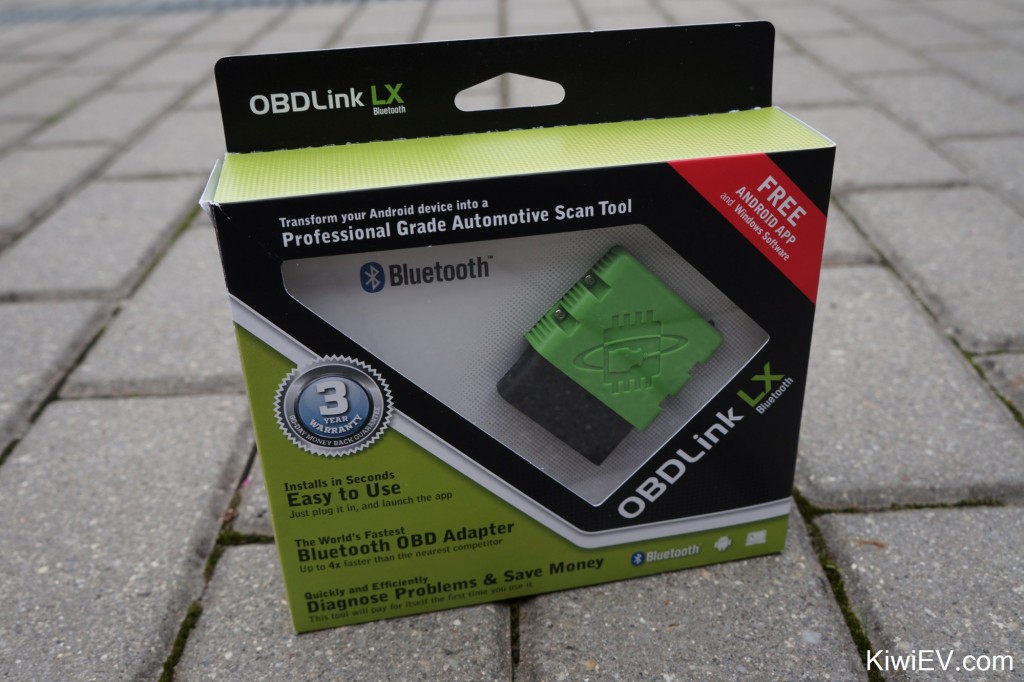 The OBD II link connector arrived, but will it work?

Winter has arrived to Slovakia, bringing rain, sleet, snow and short days. However something else arrived which I was really looking forward to: my new high-speed, bluetooth OBDII adapter!

As you’ll remember, I had a bit of bad luck with my last two connectors, as I didn’t know that they needed to be high speed devices. I wrongly assumed they were all pretty similar, but that’s not the case. To read all the data coming from my car you really need a powerful adapter. So I plugged this new toy into the OBDII plug under the dash, turned on the caniOn application for smartphones (thoroughly recommended!) and waited for that sweet, sweet data. 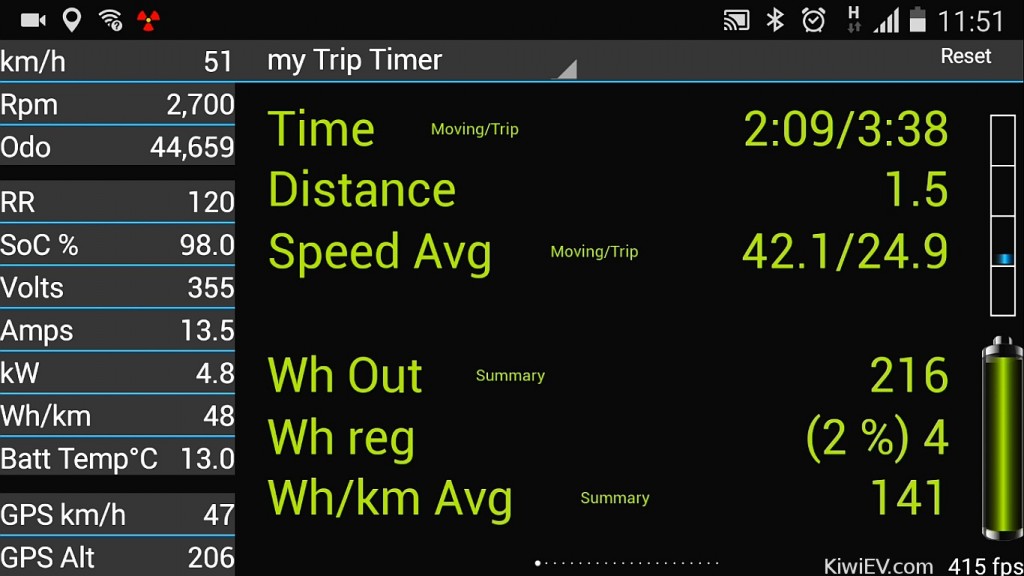 I’ve gotta say, this application is just awesome and you should download it here. It’s completely free, but such a well-designed piece of software that I tried to find some way to donate to them, but they had no donate button on their website. So instead, while typing this I opened another browser tab and …there… I just donated €10 in their honour to Sloboda Zvierat, an animal shelter here in Bratislava which cares for stray or neglected cats and dogs. 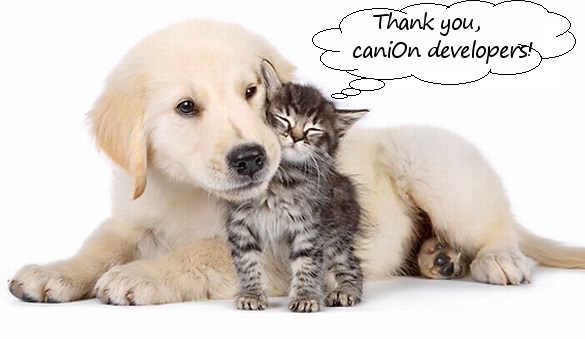 So, caniOn creators: both I and many Slovak kittens & puppies say thank you! Good karma is coming your way.

As for the data, it’s impressive. On my phone or tablet I can see everything from regenerative braking efficiency to accelerator history to heater power consumption to motor speed – you name it. This meant I was able to accurately work out that my car costs 1.6 cents per kilometre, when driving at 50 km/h (31 mph). No gas or diesel car can get even close to that!

At expressway speed however it was a different story. In Slovakia, the expressway speed limit is 130 km/h (81 mph) and as you can see in the above image, driving at this speed used a lot more power because my little city car just isn’t designed for it. It worked out at 3.1 cents per kilometre, which is even more than a Tesla Model S uses at similar speeds, according to some online discussions I saw.

Although, while uneconomical in electric car terms, when compared to even the most high-tech diesels, such as a 2015 Volkswagen Jetta ‘Clean Diesel’ it still works out half the price to drive electric. And as the world recently discovered, even at it’s most uneconomical, my car’s still cleaner and cheaper than Volkswagen’s cleanest, most efficient diesel. That’s pretty cool. 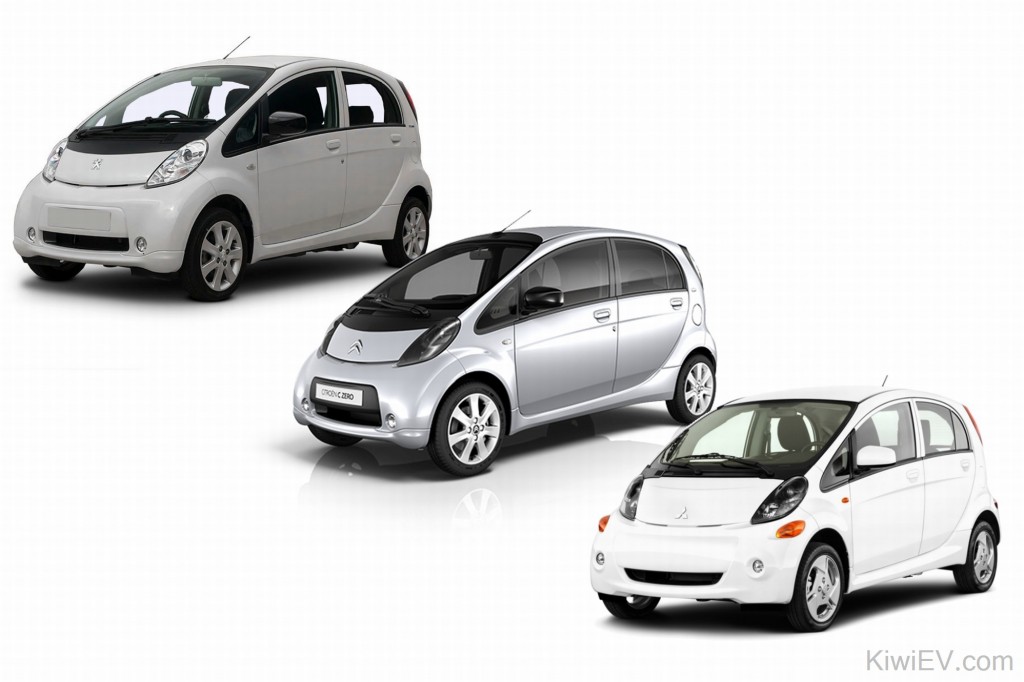 They’re all the same: the Peugeot iOn, the Citroen C-Zero, and the Mitsubishi i-MiEV.

With so much to learn about my car, I’ll be playing with the caniOn app a lot, especially as winter approaches! If you have a Mitusbishi iMiEV, Citreon C-Zero, or Peugeot iOn (they’re all the same car) then I strongly recommend getting an OBDII adapter and downloading the app. It’s brilliant!

On another note, the time has arrived for me to take my car for its first vehicle inspection. In Slovakia, new cars don’t need vehicle inspections until they are four years old. And seeing that my car is about to turn four, it was time to go for a safety test. But… being the first privately registered electric car in the country (back in November 2011), it meant there was a big chance the inspectors had never seen an electric car before.

This got me worried. Being a formerly Communist country, Slovakia still has a lot of bureaucracy and if the inspection forms say “test the vehicle emissions” then they must test the emissions, exhaust pipe or not. 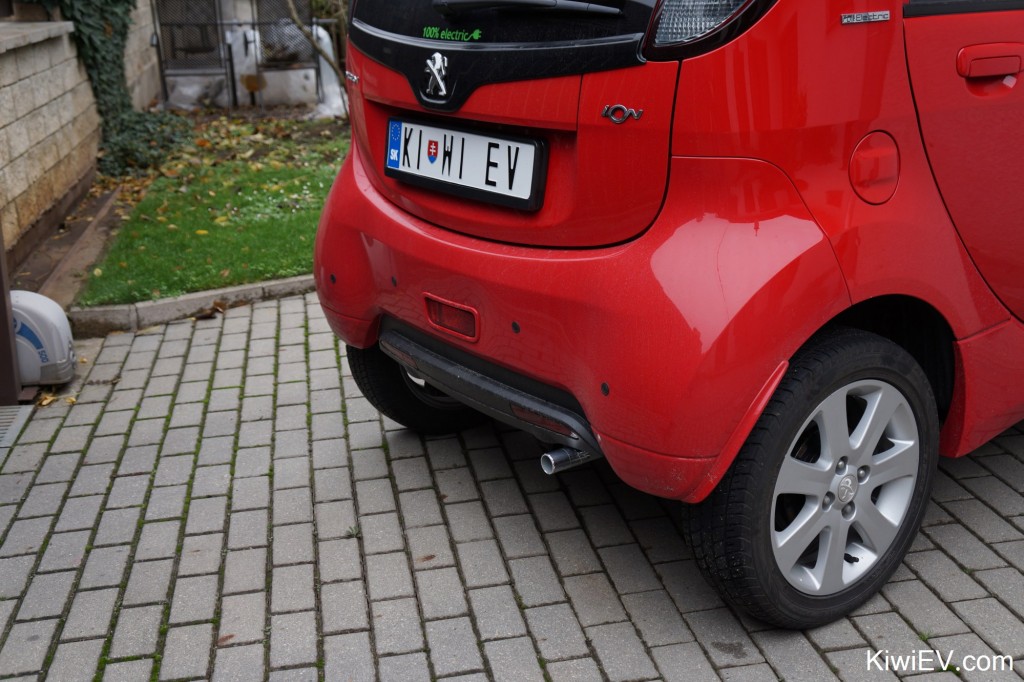 An exhaust pipe on an electric car: battling bureaucracy with absurdity.

So, I wondered how hard it would be to install a temporary exhaust pipe on the car… just in case. Then, I decided to hook it up to a kettle out of curiosity to generate “emissions”. Then, to make it really authentic, I played the sound of an internal combustion engine on the car stereo.

Then I realised I was being ridiculous, so I took the junk off the car and took it for its first official safety and emissions inspection. 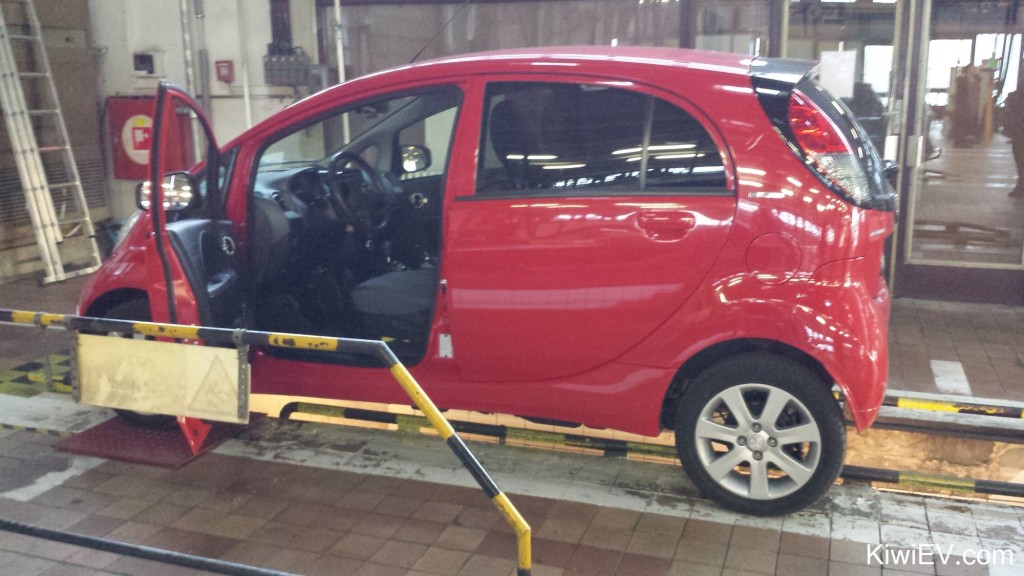 It turns out I was right: this was the first electric car they’d ever tested. It meant we held up the line while phone calls were made and vehicle inspection officers discussed how to test its emissions. In the end, logic prevailed and the car skipped the part where exhaust emissions were checked. Whew.

The rest of the test was a piece of cake, checking brakes and suspension parts for wear or rust, and before I knew it the whole thing was over. Then, just as I was in a great mood from passing the test, I noticed something pretty horrible: 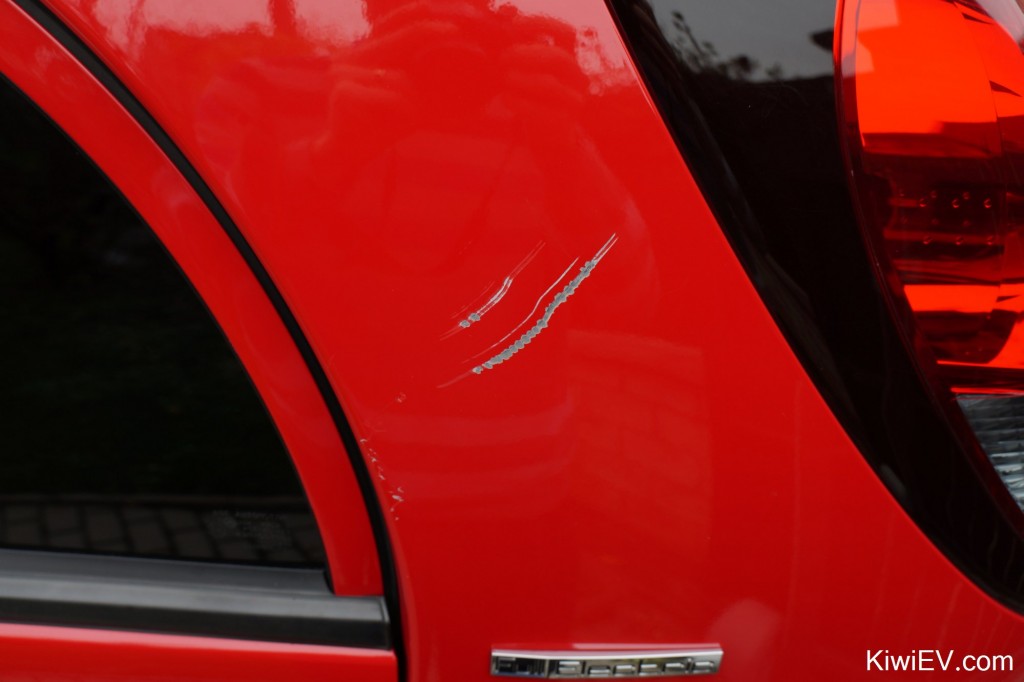 That massive, cut-to-the-metal scratch on the left, rear pillar.

It upset me, because I try to look after the car, drive safely and courteously, and park carefully – but nothing can protect you from an army of clumsy people out there that don’t care about your possessions. Sigh…

So we called the insurance company and took the car to get fixed. This meant I had to take the bus for a week, and get out of pocket €150 for the excess to get my car back like new again. Such is life, I guess.

Now I should say that buses in Bratislava are pretty good, compared to many countries. The buses here are modern, often with TVs and free WiFi – but if you’re an electric car owner, you’ll know that once you’ve gone electric, nothing is ever as good as your car. Then there’s the cost: my car uses 19 cents of electricity to drive to work, yet the bus ticket costs 90 cents! You can’t beat that!

So you can imagine my joy when it was time to pick up my car again. 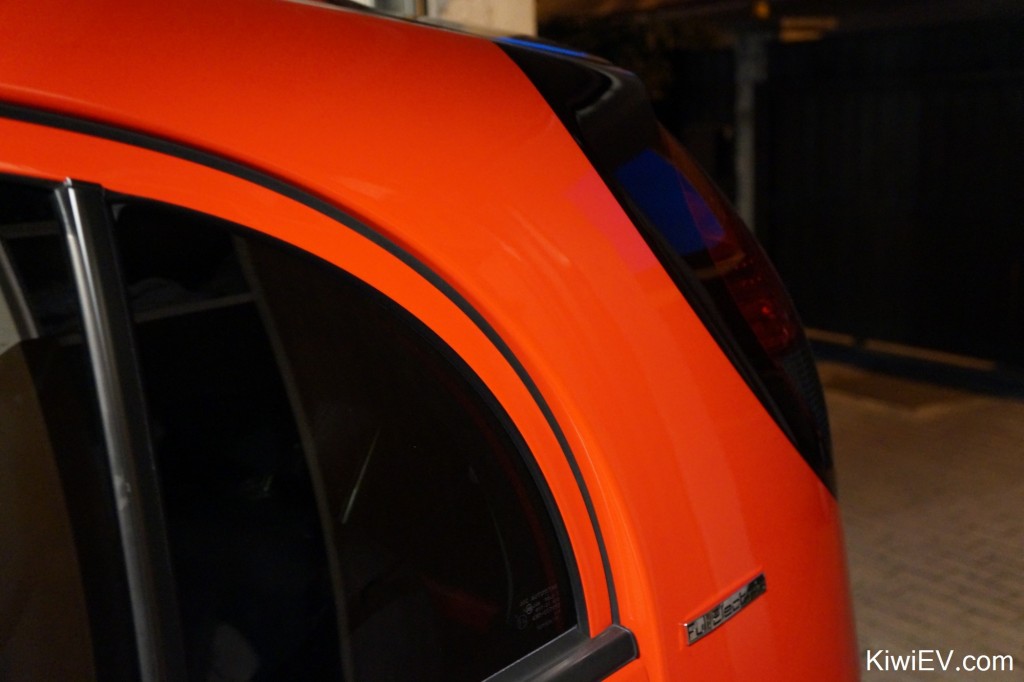 It’s so good to be driving on electrons once again, but now comes the tough part for any electric car: winter. There’ll be snow, ice, salted roads, and a lot of heater use. Stay tuned to see how my little car survives.

In the meantime, you can see all the craziness I just mentioned (and much more) by watching the latest Kiwi EV video below:

P.S. You can download the 100% electric sticker on a transparent background by clicking here.

Please drive safely, and park well away from metal fences!

7 thoughts on “Damage, data, and preparing the electric car for winter”