It’s been a few weeks since my last update on living with my electric car as there hasn’t been much to report on and electric cars don’t have much to fix or maintain so things have been quiet. In fact, a little too quiet… until 15 cars from eTourEurope arrived to recharge in Bratislava. 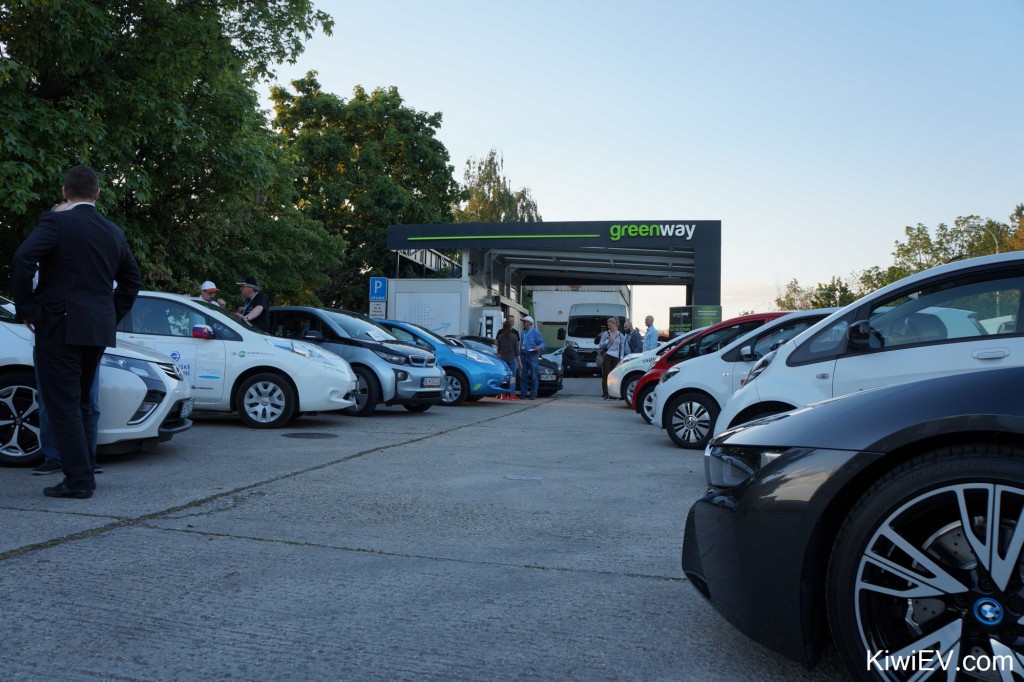 How many EVs can you identify?

eTourEurope is a yearly event which sees a handful of different electric cars from different countries drive almost 4000 km / 2485 miles across Europe to raise awareness of electric vehicles.

I met up with the convoy as they entered the Slovak capital city of Bratislava. It was great to meet so many EV enthusiasts in one place. In fact, the event got me in the mood for a road trip of my own! 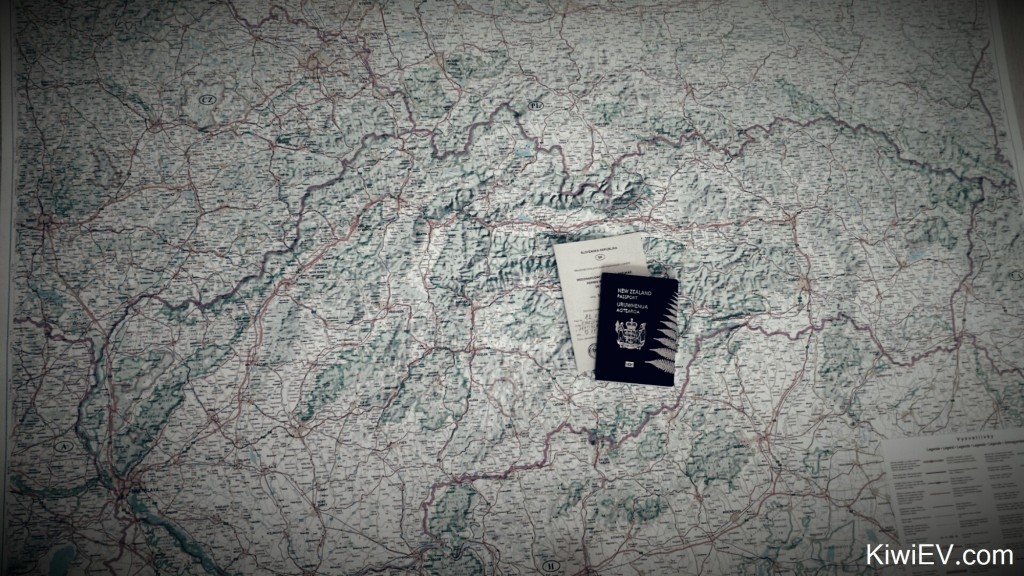 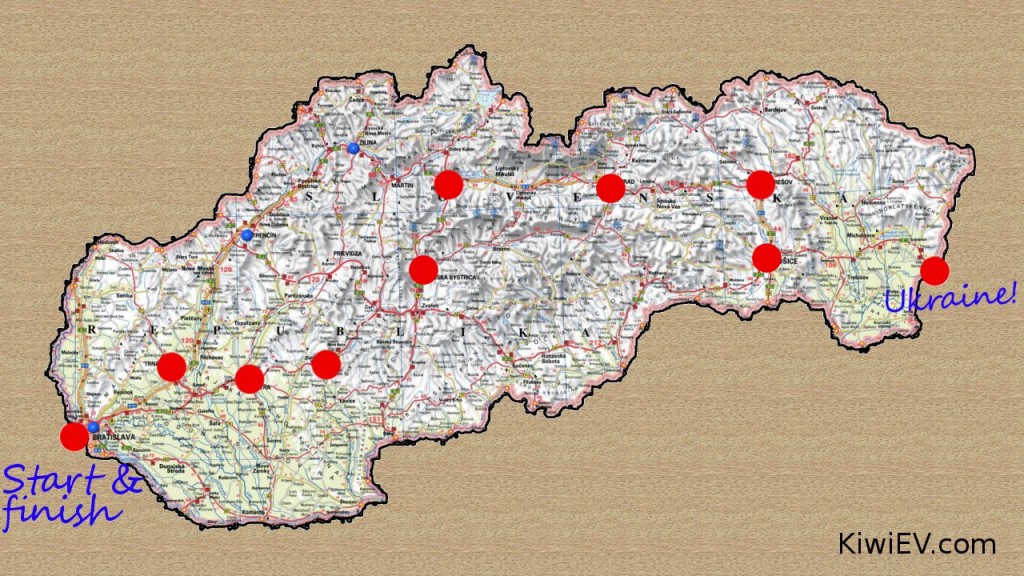 I mapped out where we’d need to charge.

I’d worked out all the places we’d need to stop to recharge, and because my car is a city runabout, not a Tesla Model S, there would be many, many, many, many, many recharging stops involved. So, let’s get started! 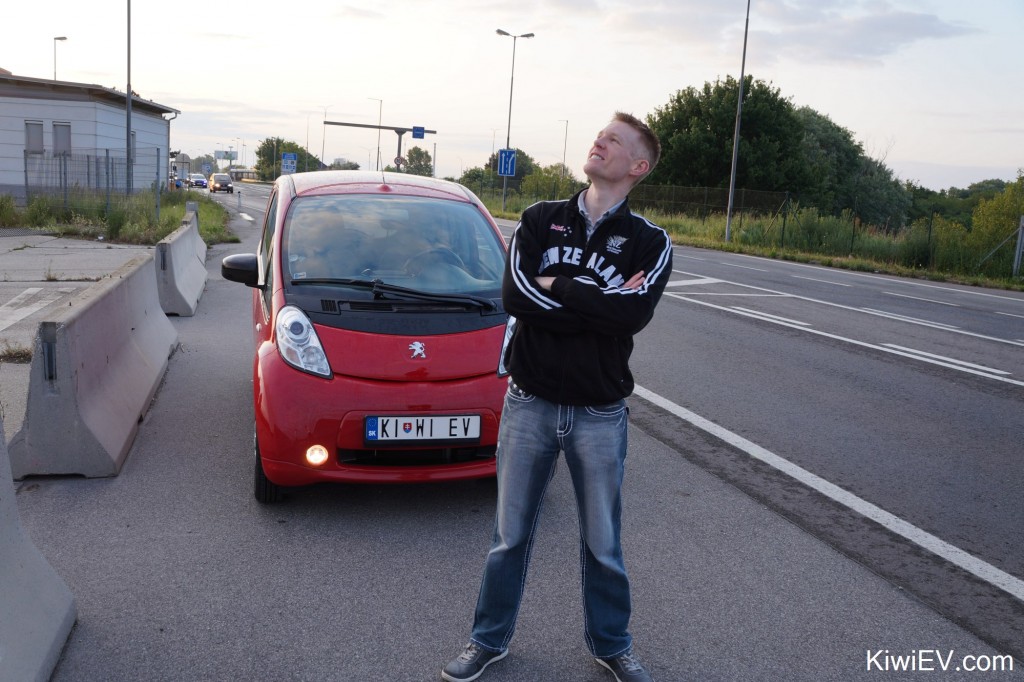 It begins at the Slovak-Austrian border

The journey began at 5:30 AM on the other side of the Slovak border in Austria.

From here we’d be driving all the way across the country to the Ukraine border in a car that was never designed to leave the city! 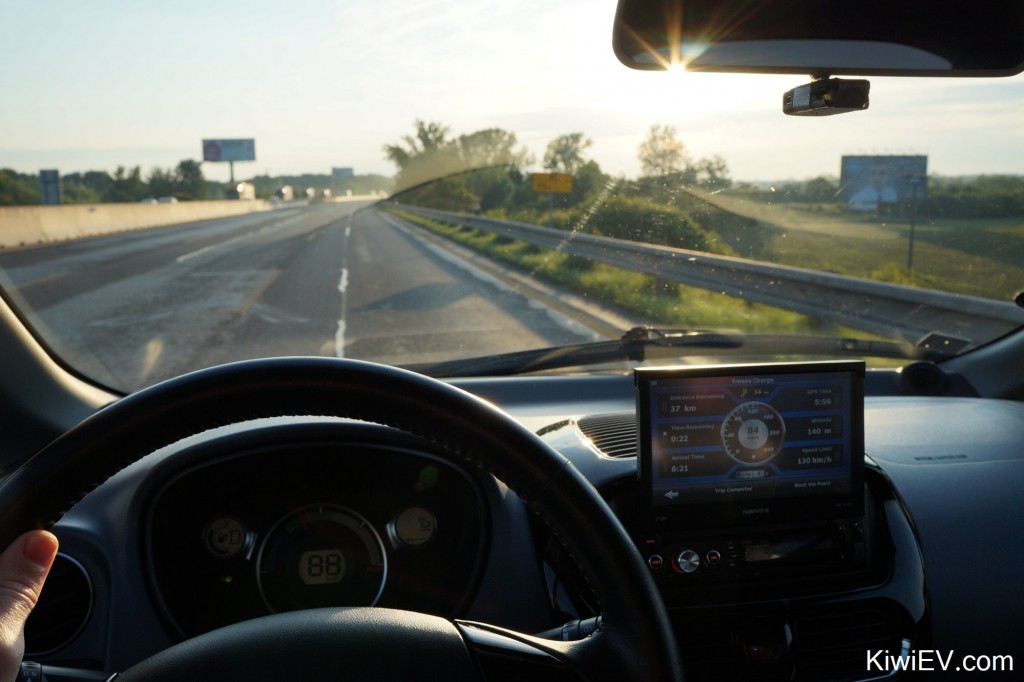 The morning sun greeted us as we headed to our first charge point.

Our first stop was 49 kilometres / 30 miles outside the city of Trnava. 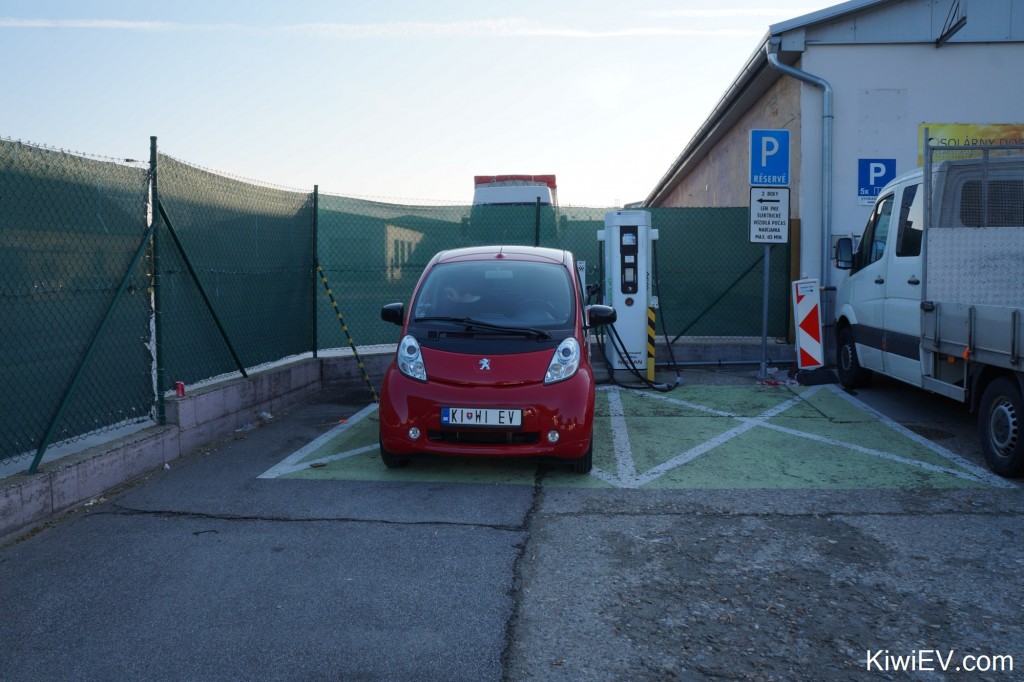 Not too bad so far, but we had a long way to go.

From here we went to Nitra, 46 kilometres / 29 miles away, where we grabbed another 20 minute quick-charge in order to reach the next stop: 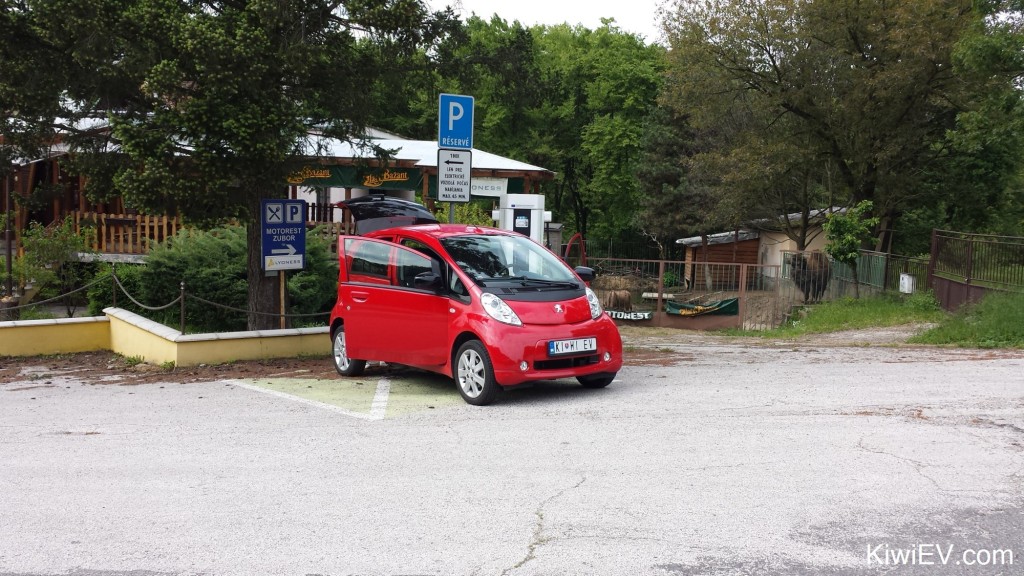 The third charging stop was at a place in the middle of nowhere called Motorest Zubor just 33 kilometres / 20 miles away. And yes, that’s a camel in the above photo. And no, I don’t know why.

From this location I forced the quick-charger to go beyond the regular 80% top-up, all the way to 95%. This is because the next stop was 83 kilometres / 51 miles away and last time we attempted that stretch of road we arrived to the city stressed out and on ‘turtle mode’. 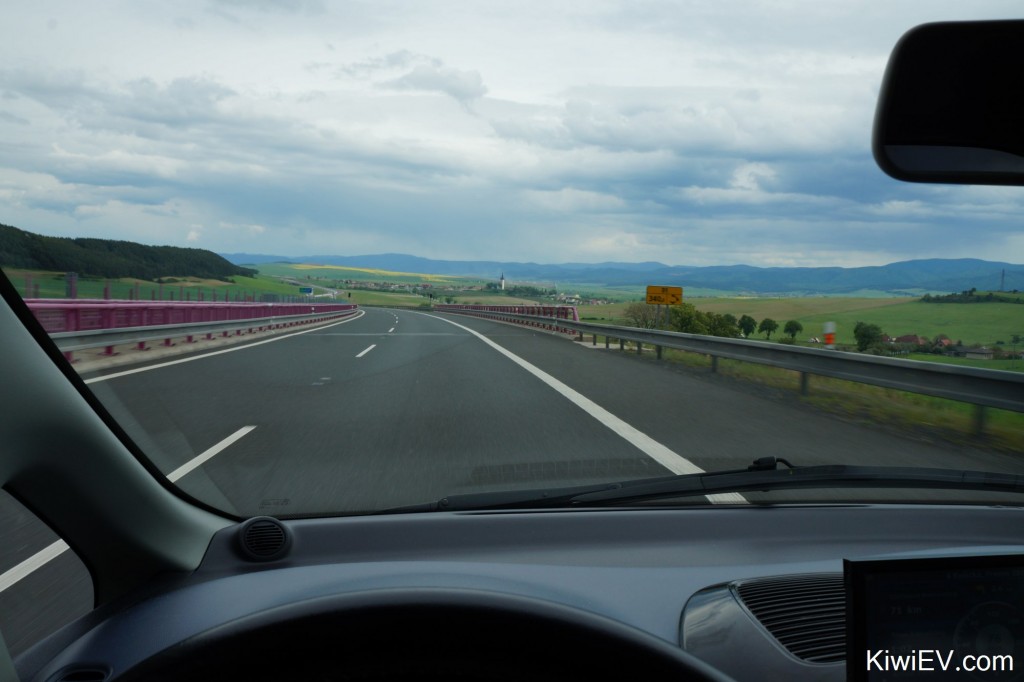 What a view. There could be worse things to look at.

Because my car is designed for cities only, it means it’s not as aerodynamic as a Nissan Leaf at higher speeds. Coupled with the cold temperatures and the strong winds, this meant I had to stick to around 80 km/h or 50 mph most of the way – not always easy in a country where driving at high speed is king! 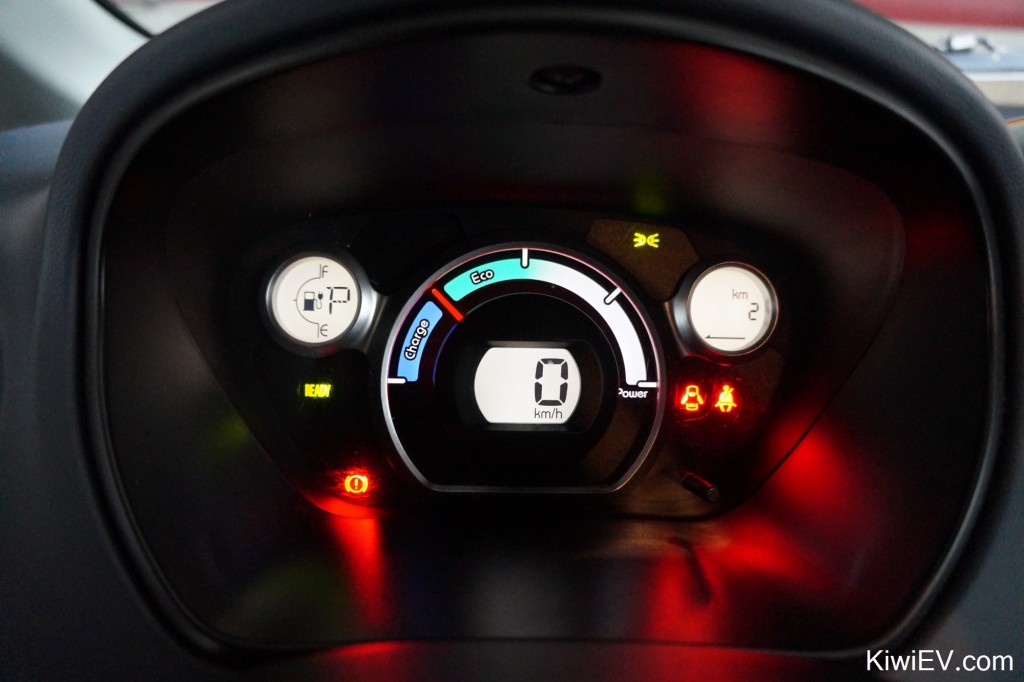 That was close. We almost ran out in Banska Bystrica (again).

We arrived to the quick-charger in the central Slovak city of Banska Bystrica with no bars of electricity remaining – but at least we weren’t on ‘turtle mode’.

We grabbed a bite to eat while the car charged up to 93% for the next leg – a mountainous journey to Donovaly, a skiing resort 1000m / 3280 feet above sea level. 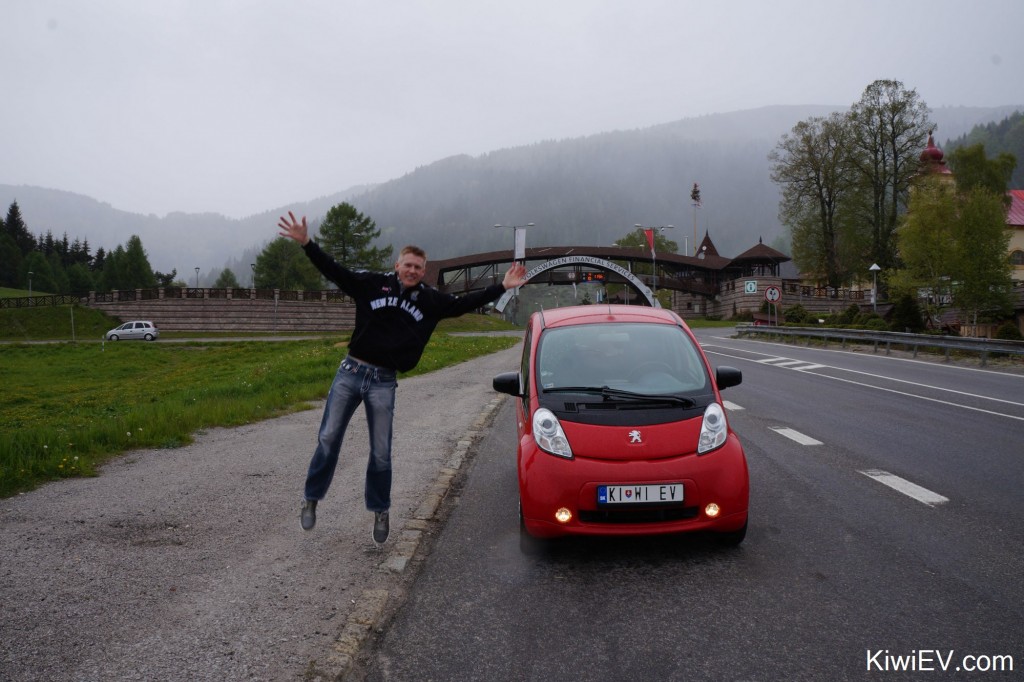 Despite the rain turning to snow the higher we climbed, we made it to the top of the mountains with heaps of battery power to spare! I also got abducted by aliens by the looks of the above photo… 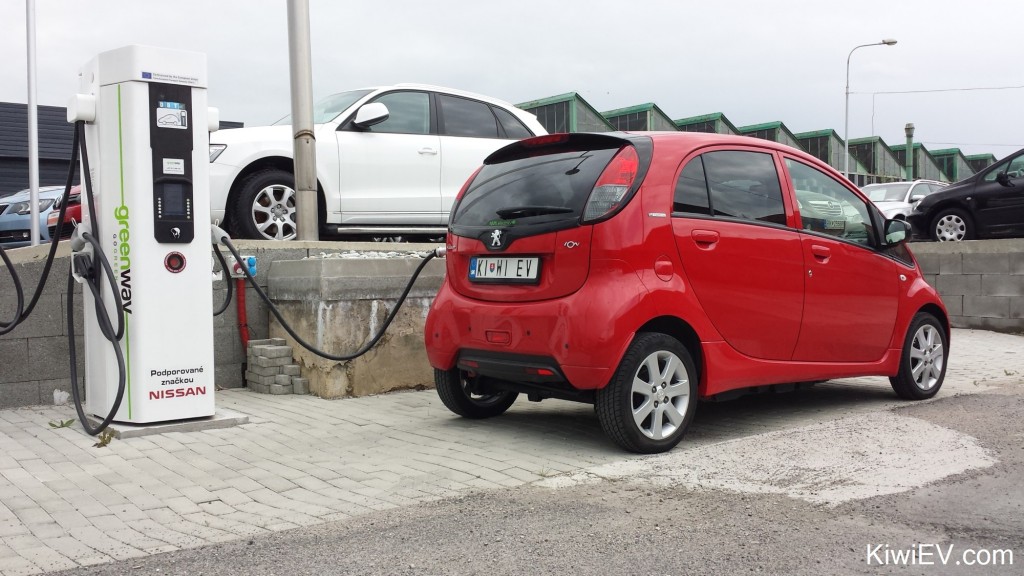 Topping up in Ruzomberok for the next big leg.

Ruzomberok was down on the other side of the mountains, 55 kilometres / 34 miles away. We topped up there to 95% because the next leg to Poprad was going to be a long one… 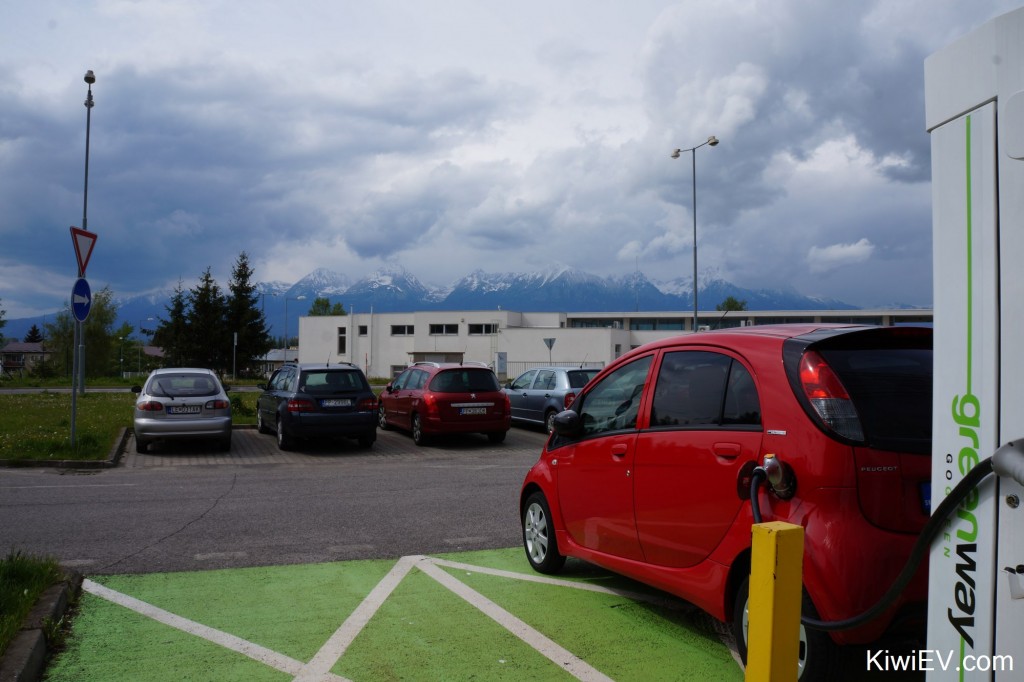 We made it to Poprad 75 kilometres / 46 miles away with a few bars of battery remaining thanks to economical driving. From here we grabbed a coffee and prepared for the next leg of the journey to Presov. 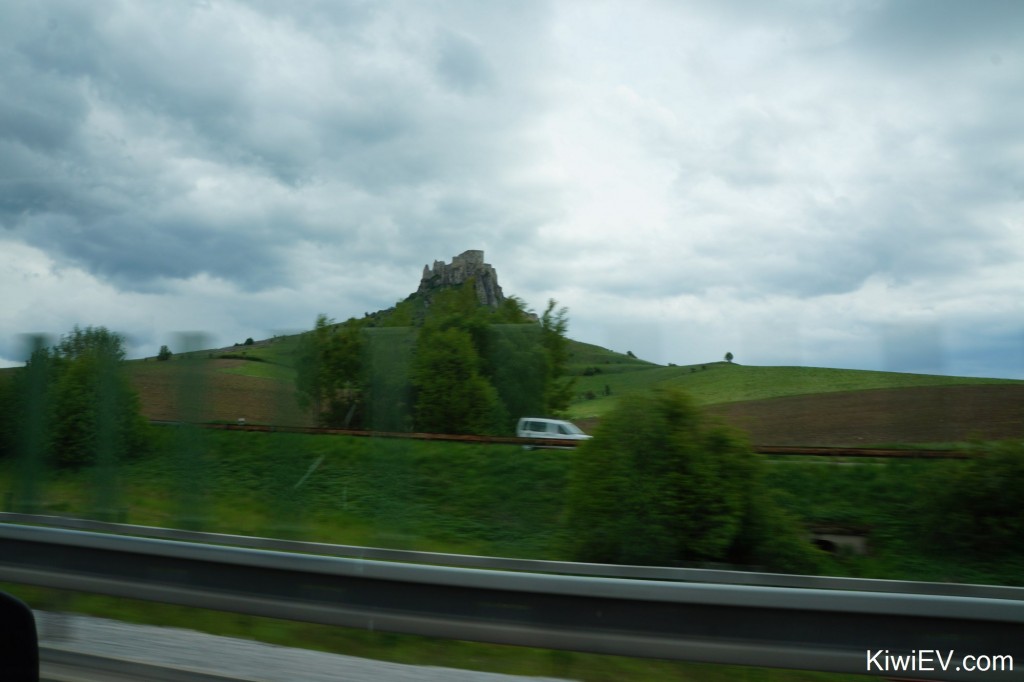 We lapped up the many miles through eastern Slovakia, admiring the thousands of years of history rolling by, as we traversed the country in a vehicle which wasn’t designed to do it! That added a real pioneering dimension to the journey. 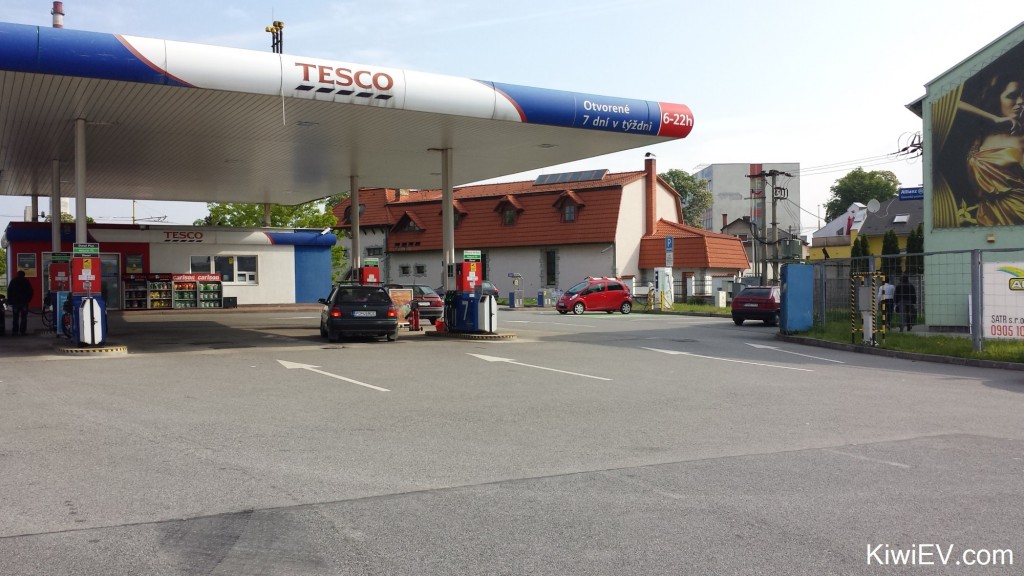 An electric cat among the gas-powered pigeons.

Before long, we’d arrived to Presov, 82 kilometres / 51 miles away from our last stop. We only charged for 18 minutes here as the next charging point was only 31 kilometres / 19 miles away.

This meant we could fly down the highways as fast as we liked to the final charging stop in Slovakia, in the city of Kosice! 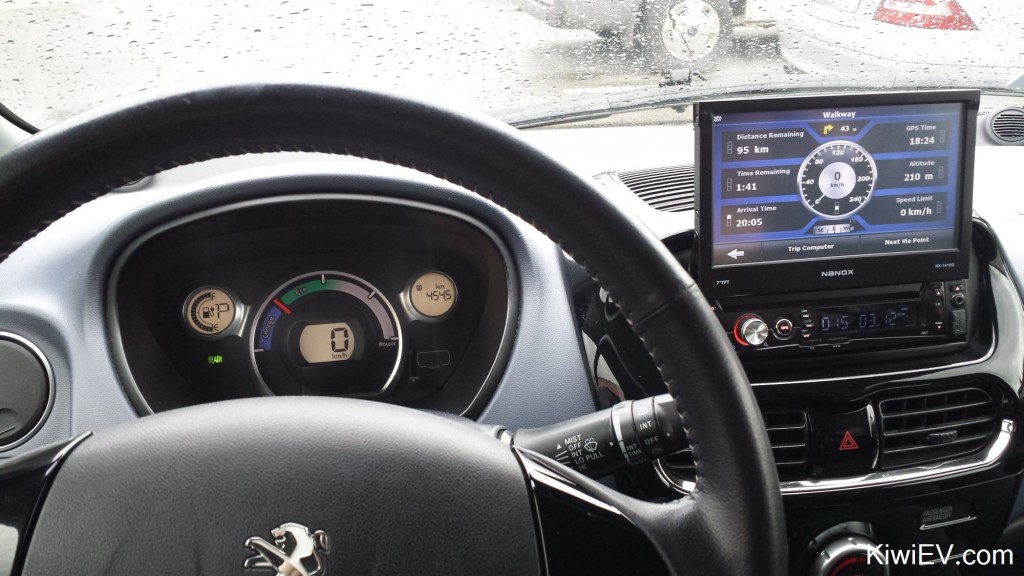 From here things were about to get spicy. Ukraine was 95 kilometres away, we had to cross a series of mountains, the temperature had fallen to around 14 °C (57 °F), the wind was strong and the rain was heavy.

So with a quick prayer to the patron saint of batteries (is there one?) we commenced the longest, riskiest part of the journey – with no more charging infrastructure at our disposal. 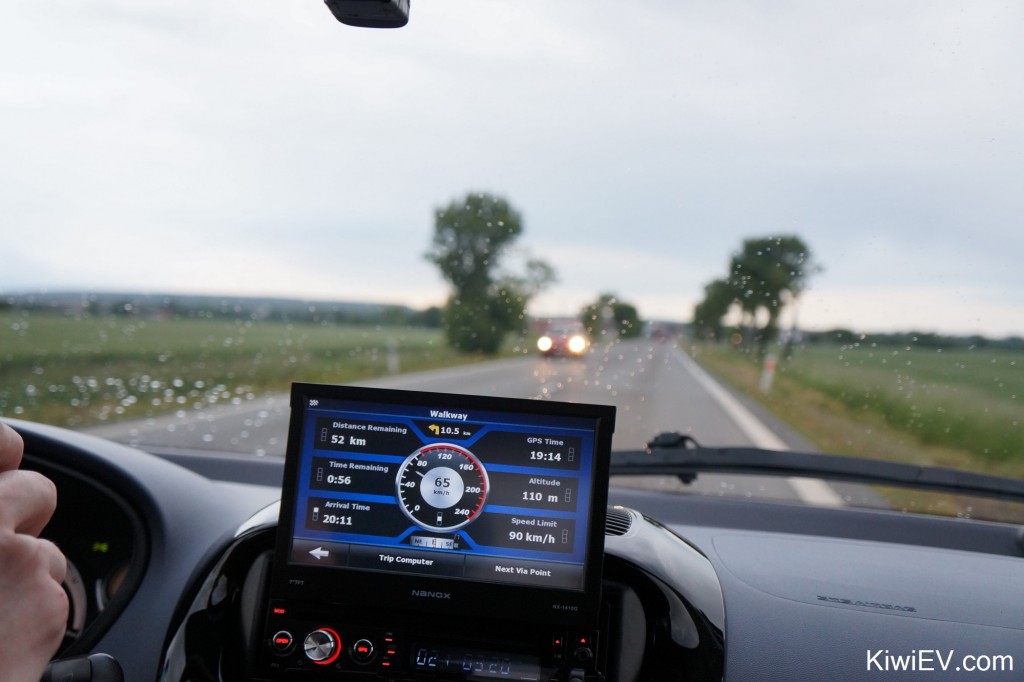 The nerves were high at this point.

Driving up and down the mountains seriously took its toll on the car’s battery. I mean let’s be honest: Mitsubishi built the iMiEV to pop around the city streets of Tokyo, not traverse the Slanske vrchy mountains in eastern Slovakia.

The Remaining Range gauge (also known as the guess-o-meter) said that we wouldn’t make it, so I drove more economically than I ever have in the past – even if it meant holding up dozens of cars behind me – something I hate doing. 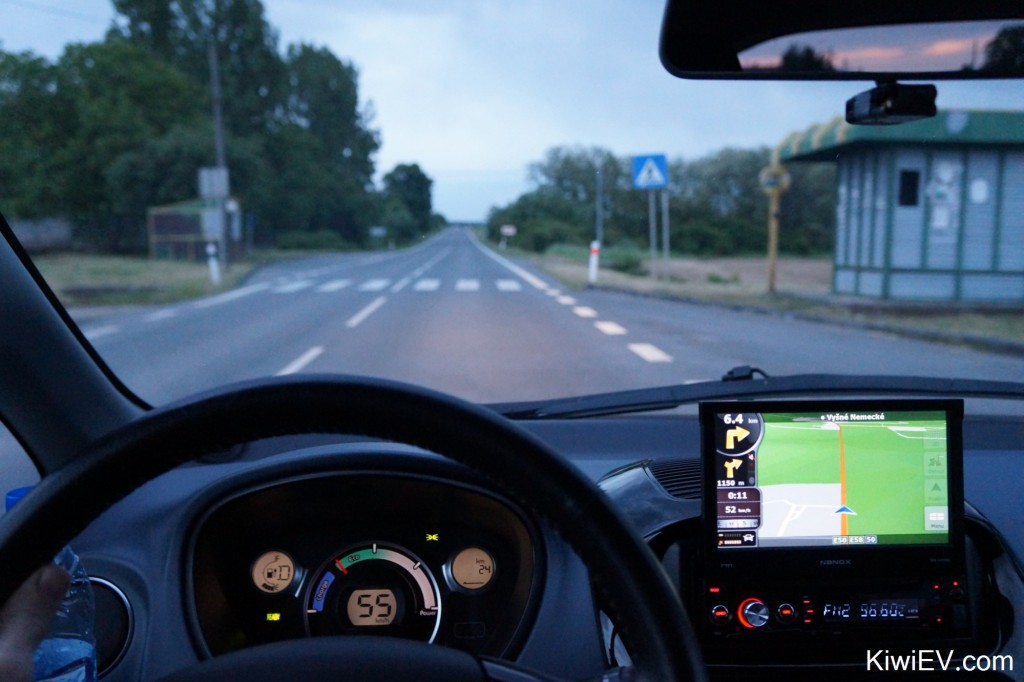 Almost at the end of the European Union!

With night falling – along with the battery meter – the mountains turned into flat valleys and the border to Ukraine appeared on the horizon! 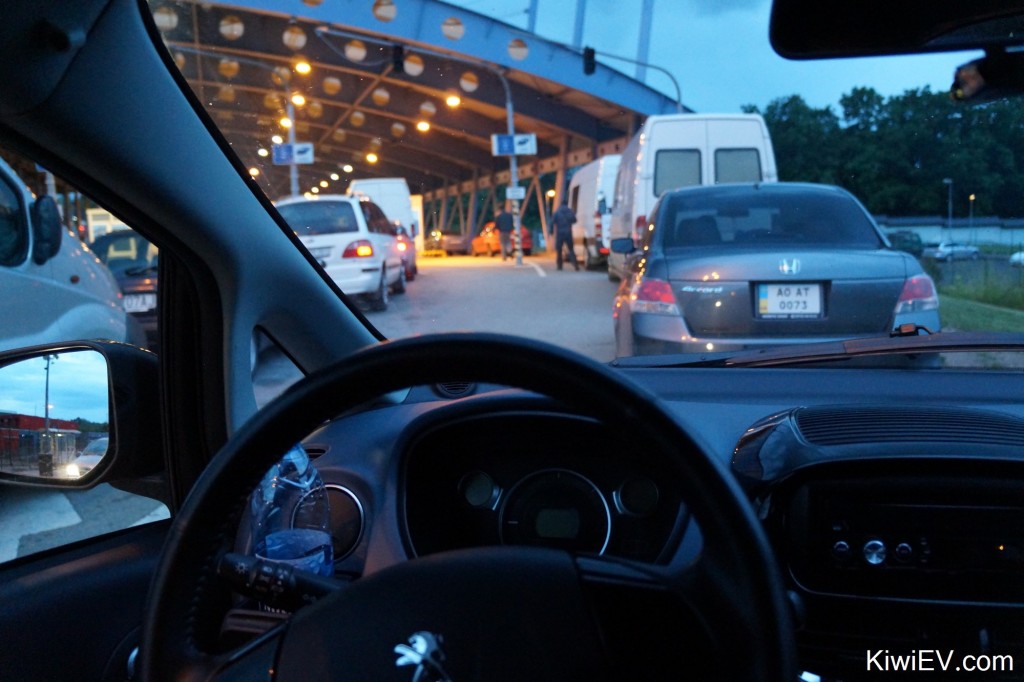 We made it to the Ukraine border! Woohoo!

However, we still had an hour to wait in order to clear Slovak customs, and our hotel was still a few kilometres away in the city of Uzhhorod on the other side of the border. 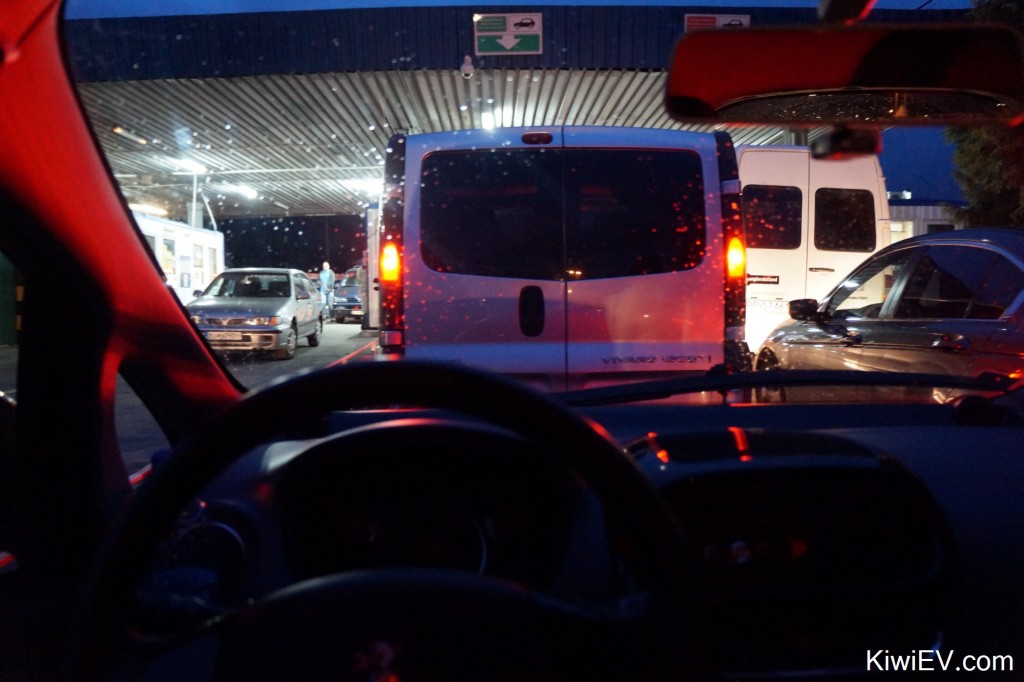 Another hour at the Ukraine internal border…

We got through to the Ukraine side where we had to wait in more confusing lines for another hour. We found someone that spoke enough English to help us out, and eventually we got through the border inspections…

After 546 kilometres / 339 miles across the Slovak Republic we made it to Uzhhorod in Ukraine!

From here we were exhausted, so we found our hotel (with two bars of battery remaining) and went straight to sleep.

The next morning we went exploring the ancient town of Uzzhorod. It’s a fascinating place with plenty of history yet there were absolutely no tourists. We felt like we were exploring an undiscovered secret. 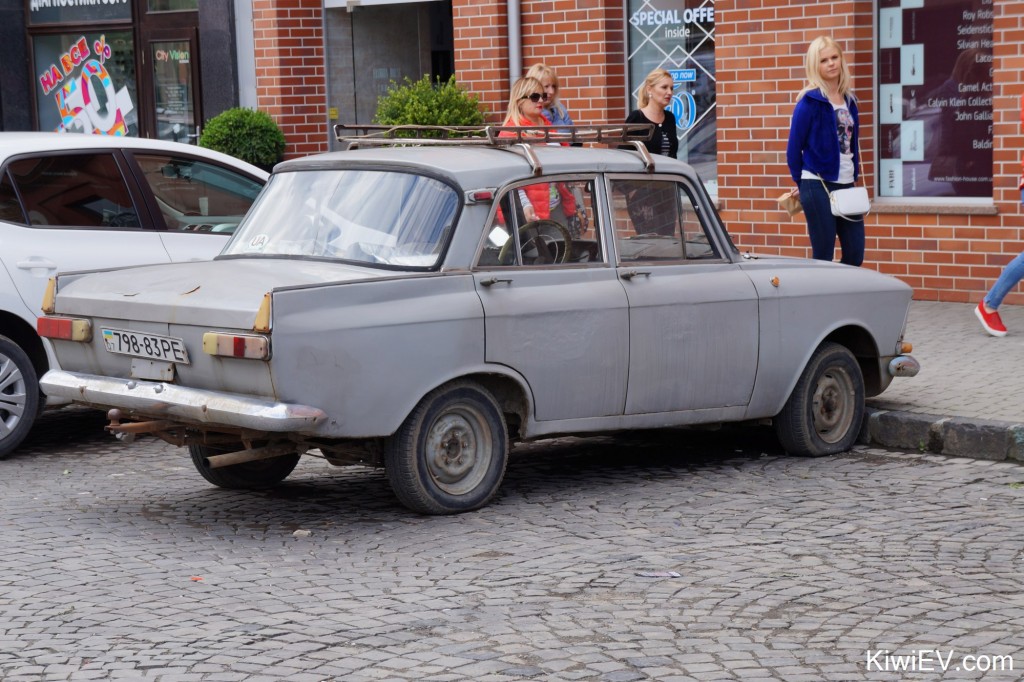 It’s glorious, but what is it? Can anyone identify this car?

Magnificent churches, cobbled streets, great food – and heaps of unusual Soviet-era cars like the one above. Imagine that beast painted deep, glossy black and converted to run on electricity! 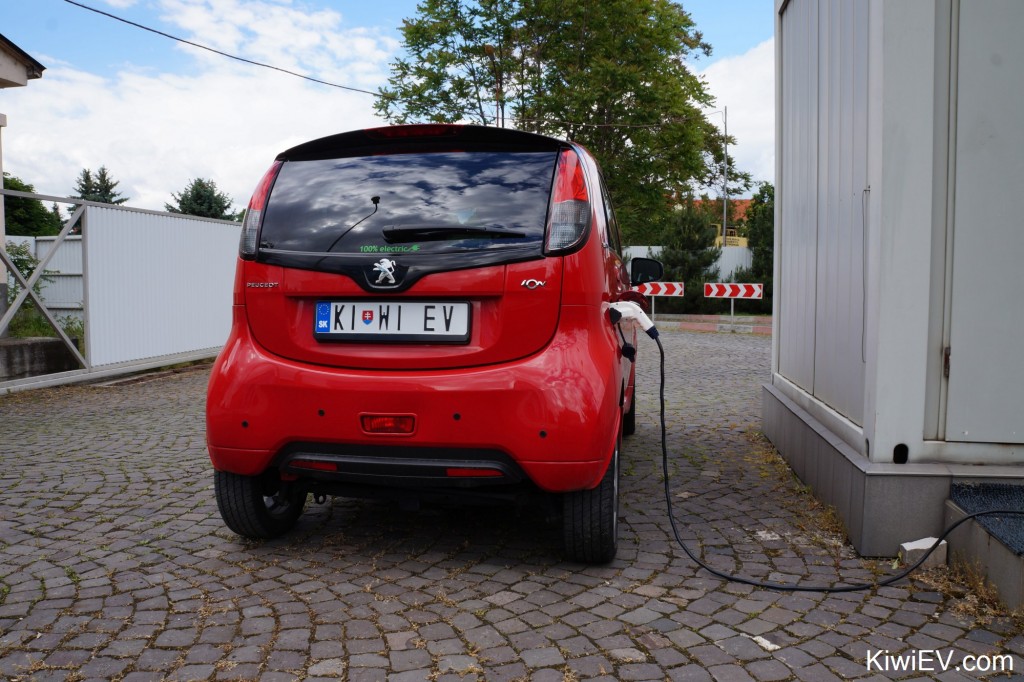 We grabbed a few electrons at the hotel.

For lunch we plugged in the car and took it to a restaurant just outside the city centre.

My EV turns heads in Slovakia, but I had never expected as much curious attention as what I received in Ukraine. I saw dozens of people stop and turn their heads and heard many folks saying something like “electrikny” as I drove around town with my window open. Neat! 🙂

At the restaurant Деца у нотаря.

We found the restaurant about 8 kilometres / 5 miles out of the city centre and stopped for lunch. We enjoyed traditional Ukrainian cuisine for two, comprising borscht with different breads, coffees, mineral water and apple pancakes all for 122 UAH (around €4.32 / $4.85 USD). The food in Ukraine is filling and tasty yet so incredibly cheap. 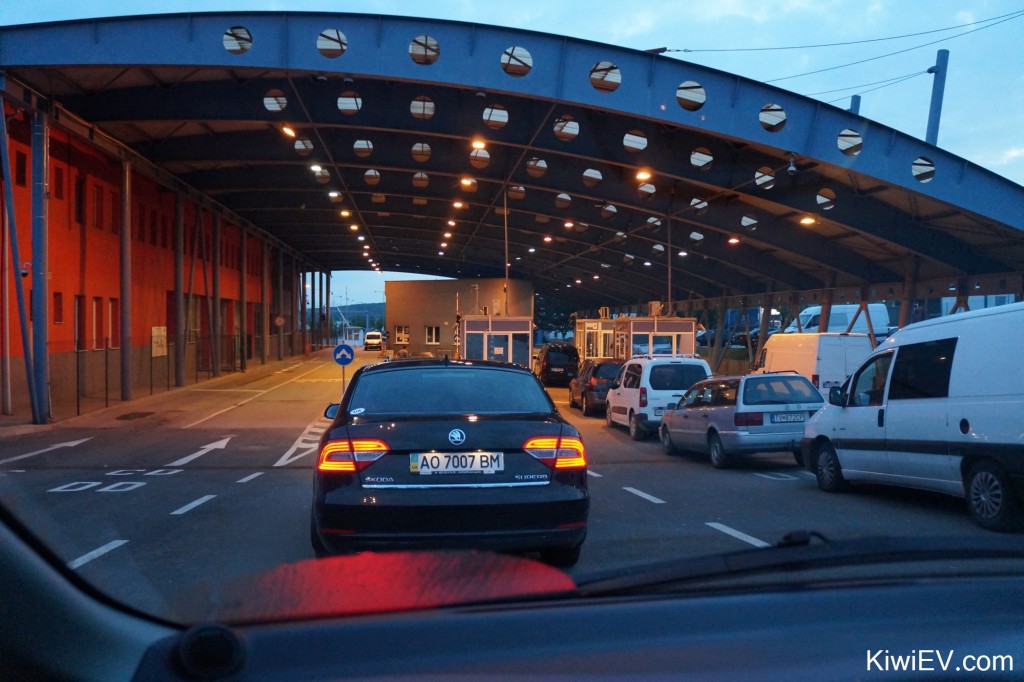 Time to head back to Slovakia!

After a fun day of exploring Uzhhorod it was time to head back to the European Union. We started early in the morning again and made our way through the border. This time everything went quickly and smoothly, and within an hour we were back in Slovakia. 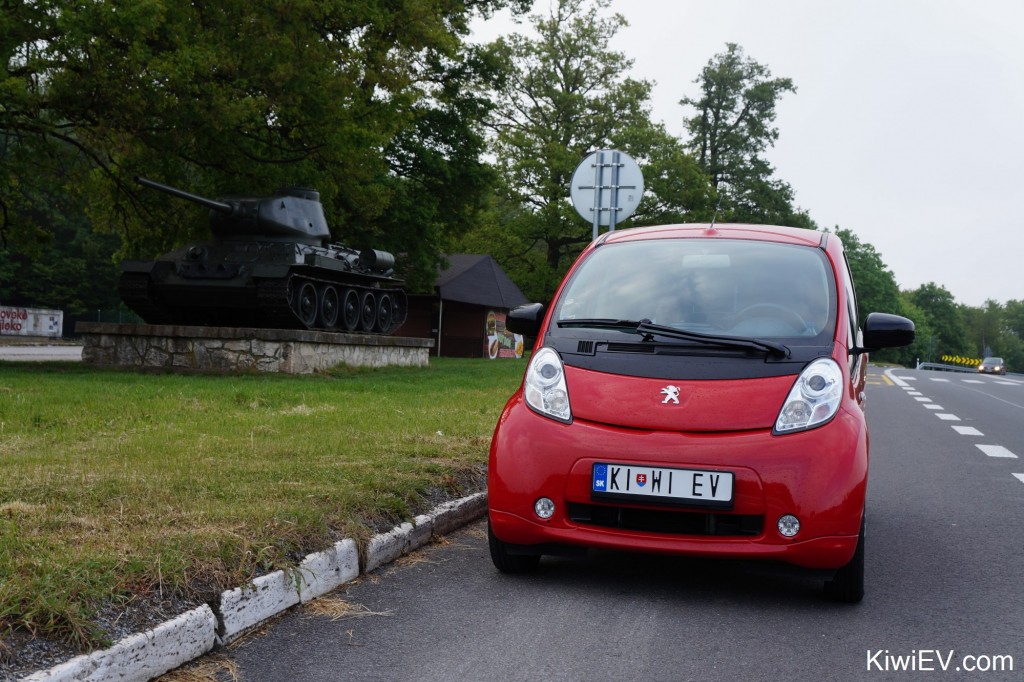 One of these vehicles fights for oil, the other fights against it.

On the way back through Slovakia we were able to take our time. The weather was much better and there was no wind, so we made it to each charging point with much more power left over than when we came the other way. 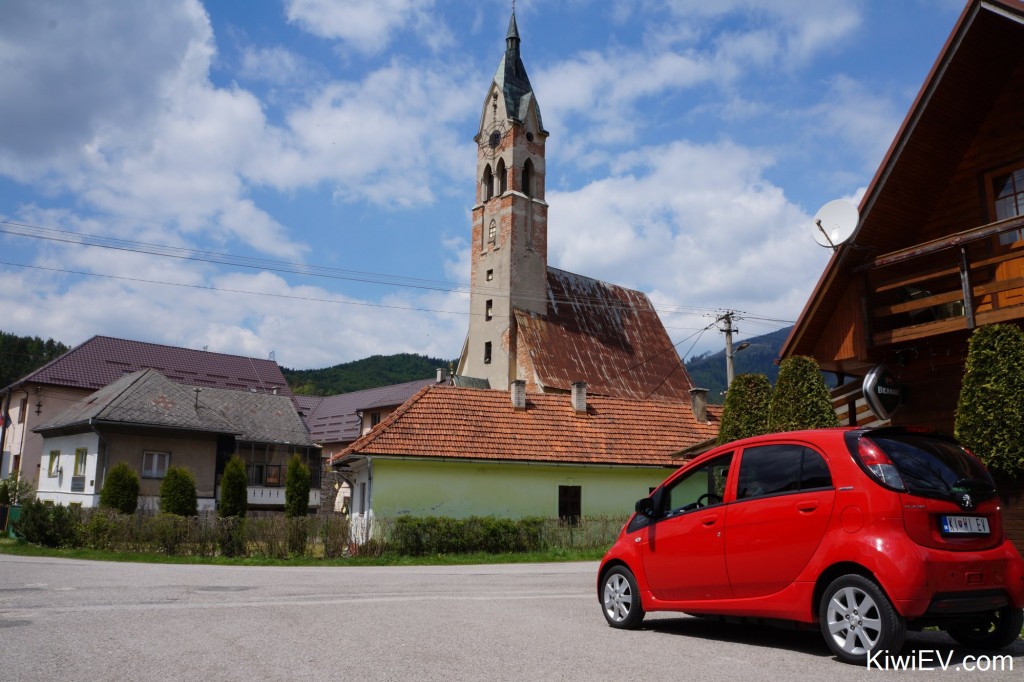 We had time to explore.

The journey back was much faster and more enjoyable, thanks largely to the weather. One of the villages we stopped in was Liptovska Osada. I couldn’t resist grabbing a shot with both the old & the new. 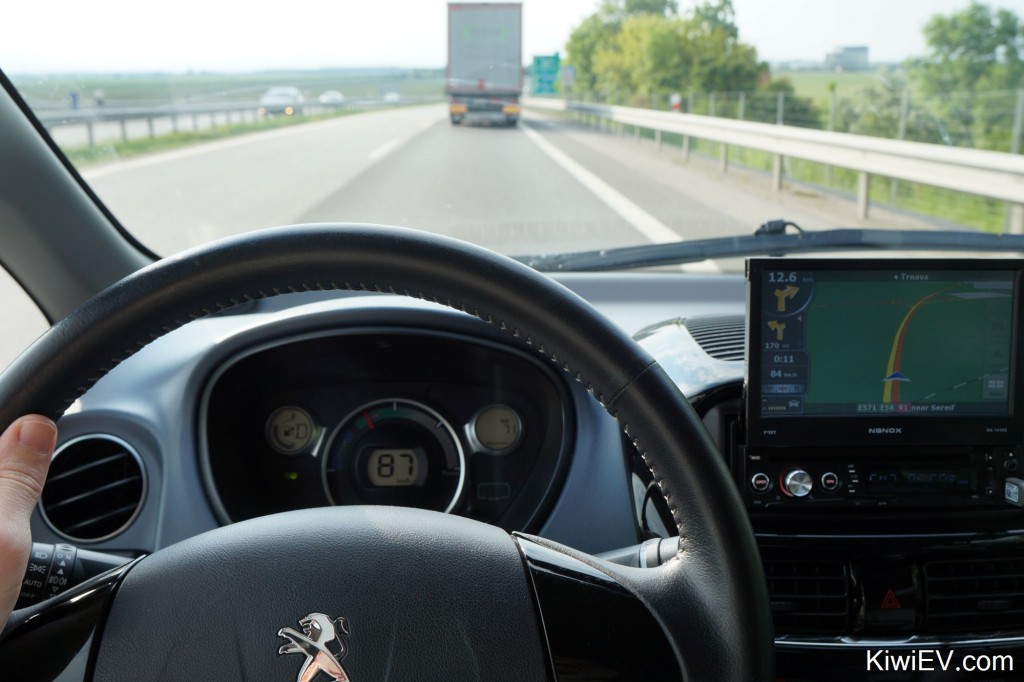 One great idea to maximise range in long-distance EV driving for cars like mine, is to go “truck-surfing”. This means you find a truck and sit along behind it. This method stops you from going too fast and wasting power, and you don’t slow down any cars behind you.

I pressed on for another 500 kilometres / 310 miles, recharging 8 times across the country, and before I knew it I was back in Bratislava. From here it was just a few kilometres from the Austrian border; where the whole journey began! 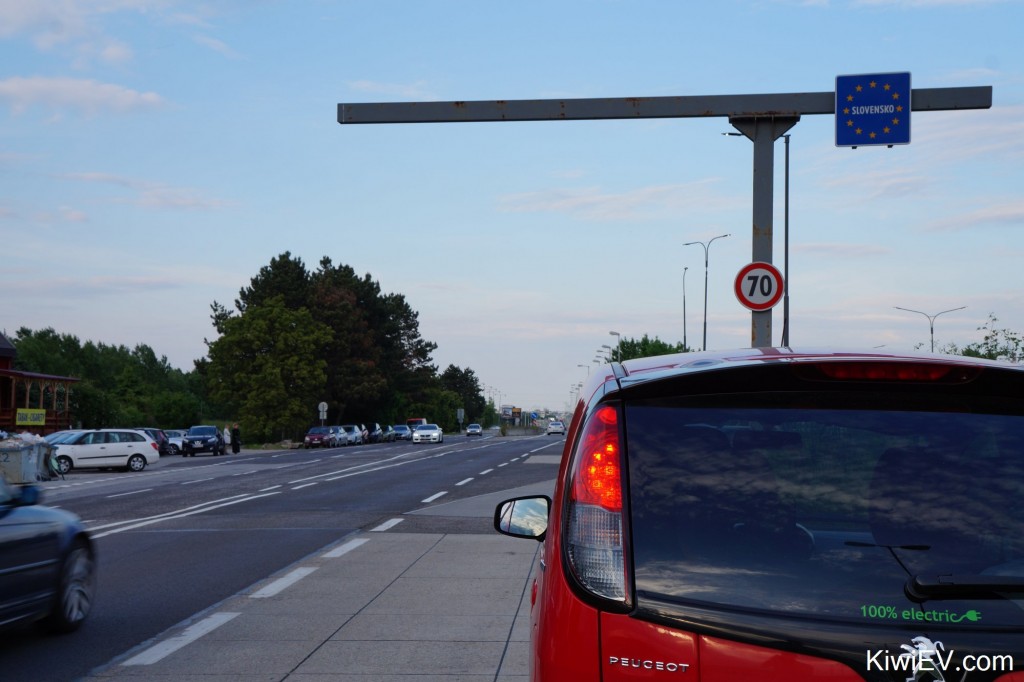 Back at the border!

Go, me! 🙂 As far as I can tell, I’m the first person in Slovakia to make this journey.

Interestingly, when my car was brought by the previous owner back in 2011 it was actually the first privately registered electric car in Slovakia. So in a way, it was the perfect vehicle for this semi-pioneering trip.

And as always, the experience was captured in an easy-to-watch video, below:

I hope you enjoyed the ride. The only question remaining… where to next?

3 thoughts on “Taking a road trip to Ukraine”